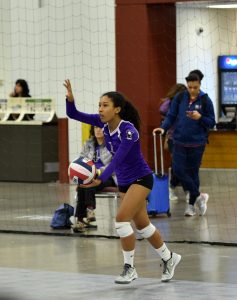 What is JO or Club volleyball?

JO (Junior Olympic) or Club volleyball is the traveling side of volleyball.  The season starts typically in December and ends between April (local teams) and June (national teams).

CLUB 43 is a Competitive JO program, however, our U12’s team is a rec team with less commitment but still a great place for a player to start out in traveling volleyball.

There are 3 levels for play for JO volleyball – Elite, Competitive, and Rec.

Top clubs, elite coaches and elite players – the teams travel across the nation playing the best teams in the country – most players are one sport athletes playing year round with the hopes to play college volleyball – annual fees range from $4000-$8000

CLUB 43 is a Competitive JO program, however, our U12’s team is a rec team with less commitment but still a great place for a player to start out in traveling volleyball.

CLUB 43 was started in 2008 by CLUB 43 Director, Annie-Adamczak-Glavan, a NCAA All-American at Nebraska and former professional player. Through Annie’s leadership and dedication, CLUB 43 offers student-athletes the highest level of volleyball instruction in the Midwest. She instills in her coaching staff and in her student-athletes the drive and desire to always Play with a Purpose!

Our teams are formed through tryouts by age and skill. We take the top 10-12 players on our 1st team and form a 2nd team if there are enough players available. We may combine age groups to form the most competitive teams possible.  Cuts are made at tryouts however we try not to cut any players U12 and under.  Tryouts are in two separate age groups – U12-U14 are at the end of October and U15-U18 are in the middle of November. July 1st is the cut-off date for each age group – for example if you turn 13 before July 1st you would be a U14 player – this formula is used in all age groups.

We begin practices at the end of November and play through April/May. Our 1st teams will play a more competitive schedule than our 2nd teams. We do have time off for Christmas and spring break. Practices will be held at the 43 Hoops Basketball Academy in Hopkins running 1-1/2 hours long twice a week.

We are proud to say we are the ONLY CLUB IN THE COUNTRY WITH AN ALL FEMALE STAFF.  We find it extremely important for women to empower women.  Young girls need to see and work with strong, independent, athletic women to encourage them to achieve the same.  Our coaches are passionate, committed and truly love being in the gym. 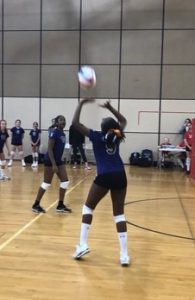 We do not have equal playing time – we put the best players on the floor to be the most competitive we can be. However in the Molten Series or if a team is in the loser’s bracket of a tournament – coaches will relax this philosophy and play everyone as equal as possible by position.  All practices, tournaments, and training are mandatory.  We do have excused absences – illness, church, mandatory school events and funerals – but all other absences like birthdays, testing, vacation, sleepovers, driver’s ed, etc. –  are not excused and may result in a loss of playing time.  If players abuse our policies they could be dismissed from the club without a refund.

Fees are based on the team level, length of season, travel schedule and age. Base club fees include: uniform top, spandex, warm-up jacket, practice tee, knee pads, water bottle, practice time, paid experienced coaches, and tournament and player fees. Some teams will have jump training and travel expenses covered – see what is covered by team under FEES.

Many other clubs DO NOT cover travel expenses to out of state tournaments – please compare our fees to others – this expense alone will add $2000-$3000 to your total fees at other clubs.

CLUB 43 IS FUN, COMPETITIVE AND EXCITING – WE TEACH – WE TEACH YOU HOW TO PLAY THE RIGHT WAY AND OUR PLAYERS LOVE IT